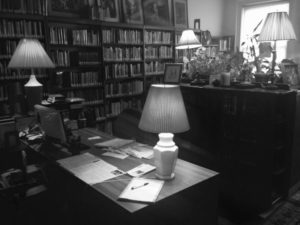 The Kristine Mann Library was named for Dr. Kristine Mann, one of the earliest practitioners of analytical psychology in the United States. Dr. Mann’s bequest in 1945 of 400 books to the Club formed the nucleus of the Library’s collection, which has grown to about 20,000 titles. This includes books, articles, files and audio-visual materials. The majority of the collection is now on a searchable computer catalog; the rest of the items are in the process of being added. The APC owns the contents of the KML and co-manages it with the C.G. Jung Institute of New York. Members of the two organizations serve on a Board of Trustees for that purpose.

The Library is a major repository of materials related to analytical psychology, including many rare items. The collection includes all of C.G. Jung’s works in English and German and in many other languages. There are also works by many other authors in the areas of religion, philosophy, art, anthropology, alchemy, symbolism, mythology, and fairy tales.